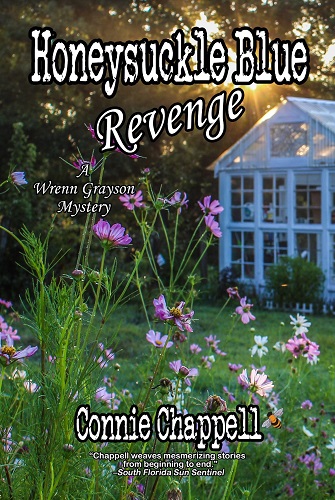 Connie Chappell sets the hook supremely well with one perfectly placed tug and her captivating new novel spins out the unique blend of characters and suspense we’ve come to expect from this mystery writer.

The story’s heroine, Wrenn Grayson, shows sensitive insight into the value of history with words like, “I witnessed history today and it tingled along my bones.” This small-town historian intends to write a newspaper column on one of her hometown’s historic landmarks, Honeysuckle Blue Nursery. From the history books, she learns of the 50-year old unsolved hemlock poisonings of four prominent citizens, collectively tagged “the lords.”

Chappell’s love of words shines through in this mystery, as well as her talent for character creation and scene description. Readers will stop and applaud this story’s exceptionally crafted ending.

Connie Chappell delivers a thrilling ride through history with characters, past and present, vivid enough to reach out and shake your hand. This must-read is infused with pure suspense.

Give your readers a quick description of your new Wrenn Grayson mystery, Honeysuckle Blue Revenge.

While researching Honeysuckle Blue Nursery, historian Wrenn Grayson stumbles onto 50-year old newspaper articles describing the deaths of four men, all poisoned by hemlock. The mystery pulls her deeper into other ancient secrets involving deadly nightshade, Socrates’ patience, and the “telling of the bees” lore until her life is also threatened by the faceless hemlock poisoner.

Is there a character in Honeysuckle Blue Revenge that reminds you of yourself?

You shouldn’t be surprised to learn that Wrenn Grayson is that character. Both Wrenn and I are students of hometown history. I became fascinated with Springfield, Ohio’s past the day my third-grade teacher brought a local history book into the classroom. It included photographs of mayors from the late 1800s. I was fortunate to earn my livelihood for 30 years by working closely with Springfield’s mayors and writing the town’s history.

You have written six books and, as a fan, I have to say your books can be addictive. Is there a new one in the works?

First of all, thank you for the compliment. That’s nice to hear. And yes, I always have a book in the works. Many of my fans have long awaited the release of the third and final installment in my Wild Raspberries series. The title is Summers Only. I expect this work of literary fiction to be released at the end of 2020. What’s unique about the books in this series is that each subsequent book goes back in time, rather than forward. That’s a twist, huh?

You may not think that people notice all the tiny threads you weave into a story, but I seem to remember there is often a dog written into your story lines. Give us some insight.

You’re not the first person to notice this thread, but I give you credit for the observation. One reader commented on liking the names I give the dogs in my stories.

You might have noticed all those dogs reign in the sporting-breed group. It’s my favorite. I raised a Welsh springer spaniel named Whitney and an English setter named Tucker. I have a hundred crazy stories about those two.

When you’re not writing bestselling novels, what are you doing?

I am the active sort with lots of interests. Just because the writing stops each day doesn’t mean that my responsibilities as an author cease. I have speaking engagements on my calendar. I’m currently teaching a writing class. The topic is memoir. I became a master gardener in my county and spend time each week tending to greenhouse plants. I like getting some miles in on my mountain bike. I join a group of walkers, when I can, and play pickle ball every chance I get. At home, my flowerbeds keep me busy. I even like cutting and trimming the lawn. I have a great group of friends with similar interests. Well, maybe not the yard work. Nobody likes cutting grass like I do.

Lovingly and Orderly: A Son’s Lament, A Heart-Wrenching Story from a Devoted Son